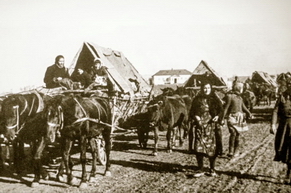 Political oppression was rife in the 1930's Soviet Union. Stalin’s regime supported NKVD (political police) activity, initiated a campaign against ‘the Fascists’ – German speaking population, abolished national regions and worked out plans for the deportation of the German–Mennonite population in 1939. Arrests and physical assault on the clergy and teachers undermined the Mennonites and their spiritual, national and cultural identity. This affected the Mennonites’ attitude towards those in power.

Mennonites and the authorities

The war between Germany and the USSR broke out in June of 1941. Some  Mennonite youth representatives volunteered for the Red Army. Some just waited for the end of the struggle between the warring parties. However, it was almost impossible to stay neutral and  uninvolved. Some politicians and  Communist Party activists were exiled to the East of the Soviet Union. The law ‘About the German population in the Ukrainian SSR’ was established in August 1941. According to that law anti-Soviet elements had to be arrested and male German speaking people (16–60 years old) had to be called up to ‘build battalions’. The German–Mennonites from the Kharkov, Dnepropetrovsk, Zaporozhe, Stalin (now Donetzk), Voroshilovgrad (Lugansk) provinces and the Crimea region had to be evicted. However, the Wehrmacht army advance did not allow for fulfillment of  these plans.

Between Bolshevism and Nazism

About 163.000 Mennonites and ethnic Germans lived in Ukraine before the war. The aim of the Fascist authorities was to use the human potential of the occupied territories for their own purposes, to rely on the local German speaking population. In order to do that, they provided congregations with material support and pretended to restore the ethnic schools and religious life. At first they got some result. However, the Mennonites soon became disappointed because the collective farms, organized by Stalin, were not disbanded and  instead of Bolshevist ideas, Nazi-ideology was being taught at schools.  The Mennonites also couldn't put up with the Nazis’ racism, where the local non-German population was regarded as subhuman.

Strangers in their own land

The Nazis failed to divide the local multinational population. History has many examples of friendly relationship between the Mennonites and their Ukrainian neighbors. However, the Nazi propaganda influenced the Mennonites psychologically. During the occupation they found themselves ‘strangers in their own land’. However, their return to the Soviet Union shows that they did not feel responsible for the Nazis' atrocities.