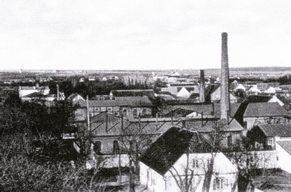 Catherine the Great invited the Mennonites to Russia to develop the new lands of the empire. Chose for being skillful farmers they were given land, and money for travel and adjustment. They were exempt from military service and got some civic and self-government rights.

The first 228 Mennonite families arrived in the Ekaterinoslav province  from Prussia. They established eight colonies: Chortitza,  Einlage, Rosenthal,  Kronsweide, Neuendorf, Shoenhorst, Neuenburg and the Insel Chortitza settlement. The next immigration group (118 families) arrived in the Novomoskovsk and Alexandrovsk area in 1793–1796. At the beginning of the 19th century, 150 Mennonite families were settled in the Tavria province (1804) where they set up their villages along the eastern bank of the Molotchna River. In 1804–1806 another 365 Mennonite families settled in this district.  During the first decades of the century the Mennonites founded 27 colonies in Molotchna: Halbstadt, Tiegenhagen, Schoenau, Fischau, Lindenau, Lichtenau, Muensterbeg, Altonau, Tiege, Orlovo, Blumenort, Muntau–Ladekop, Mariental, Rudnerweide, Franzthal,  Pastva, Grossweide and Blumstein.

In 1835 five more Bergtal colonies (145 families) settled in the Alexandrovsk area. In 1852 they were united into the third Mariapol Mennonite District.   When in 1836–1866  Doukhobors,  Russian sectarians, left for the Caucasus, the representatives of the Gnadenfeld Old-Flemish congregation  from Prussia took those vacated land, founding Gnadenfeld Mennonite Volost in the Molochansk Mennonite District.

Mennonites  from Danzig, Marienburg and Elbing settled in the Samara province from the 1850’s. By 1874 there were 16 colonies. Some Mennonite settlements were located in the Kiev province (Mikhalin village) and in Volhynia (Karlsweide, Swiss Mennonites settlements). By 1870 the total number of Danzig and Prussian Mennonites, who had  arrived in Russia, amounted to 2300 families.

New migration due to land problems

Economic development and population growth caused land problems. ‘Inheritance Law’ (1866) allowed fragmentation of land holdings but could not solve the lack of  land. However, the Mennonites bought the nobility’s lands after 1861, when serfdom had been abolished . Some new groups of colonies were established in new parts of Russia. At the beginning of the 20th century the total Mennonite population in the Russian Empire was 104.000. The Mennonites mostly lived in the Ekaterinoslav, Tavria and Samara provinces. The largest Mennonite colonies were: Chortitza (1800 people), Rosenthal (1226), Neuendorf (1121), Osterwick (3100), Einlage (1258) (in Ekaterinoslav province); Halbstadt (915) and Waldheim (946) (in the Tavria province).

Photo: Wally Kroeker, An Introduction to Russian Mennonites: A story of flights and resettlements to homelands in the Ukraine, the Chaco, the North American Midwest, Germany and beyond. (Good Books, PA, 2005).