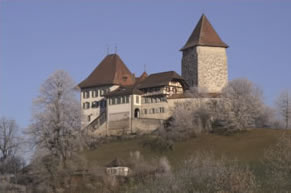 Some of their contemporaries saw them as devout eccentrics, the state church saw them as dangerous heretics, and the authorities saw them as insurgent rebels. Throughout Europe they faced discrimination and persecution, and were arrested and tortured, disinherited and dispossessed, banished and executed – nowhere for as long as in Switzerland. A minority, though, saw them as people who were serious about being Christians, and valued them as dependable neighbors because they tried to live what they believed. Who were these ’Anabaptists’, who refused to attend official church services, to swear oaths, and to perform military service – and were often willing to pay a high price?

The beginnings of the Anabaptist movement can be found during the Reformation in the sixteenth century. In contrast to forced participation in the state church, Anabaptists envisioned an independent congregation based on voluntary membership. In 1525, former associates of Zwingli in Zürich began to baptize adults who professed their faith. In other parts of Europe, similar movements were developing during this period. The movement expanded through Europe quickly, in spite of immediately implemented persecution. But especially in Switzerland, continuous and systematic repression increasingly forced Anabaptism into isolation. This helped to create an environment of growing social isolation and at times theological narrow-mindedness. Conflicts within Anabaptism led to a split and to the birth of the Amish movement in 1693.

By 1700 intense persecution had nearly eradicated Anabaptism in Switzerland. Only on Bernese territory have churches been able to maintain a continuous existence until the present. Traces of Anabaptist beliefs with Swiss roots follow the paths of emigrants to places such as the Jura, the Alsace, the Palatinate, the Netherlands as well as North America. Outside pressure did not begin to soften until the Enlightenment and the French Revolution. The influence of Pietism and Revivalism in the eighteenth and nineteenth centuries allowed Mennonite congregations to grow and find new life.

A neighborly togetherness between the state church and independent churches was still not the norm by far. Only gradually did an attitude of opposition give way to steps of reconciliation and mutual appreciation – such as most recently the ‘Täuferjahr 2007’ and the extended Mennonite/Reformed-church dialogue (2006-2009). Today in Switzerland there are 14 Mennonite congregations with a total of 2300 members.