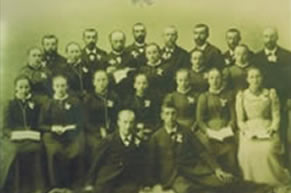 2013: ‘Gott lebet noch’ (God liveth still). The choir of the oldest Mennonite church in Switzerland, Langnau in Emmental, celebrates its 125th anniversary with a choral service.

2008: ‘Ehre sei Gott in der Höhe’ (Glory to God in the highest). A powerful piece in four-part harmony. The voices of hundreds of attendants from multiple Swiss churches ring out in song at a funeral. The hymn is sung from memory for the most part, and the accompanying organ is actually superfluous. Attending guests are astounded by the singing.

1965: ‘Halleluja, denn Gott der Herr regieret allmächtig’ (For the Lord God omnipotent reigneth). Sitting with family members in the antique chairs of the French Church in Bern and hearing Händel’s ‘Messiah’  performed by a choir of over 100 Mennonites – an experience to remember!

Singing in harmony is an important element of the church service for many congregations. It is a Swiss Mennonite characteristic that they are proud of, but also fear they might lose over time. This has not always been the case. The earliest Anabaptists composed songs of martyrdom and sang them in unison. For a long time the ‘Ausbund’ was the most important hymnal. When the Reformed Churches in Switzerland changed to singing in four-part harmony the Anabaptists claimed this to be worldly and sinful.

From revival songs to classical church-music

In the 19th century revival songs arrived in Mennonite congregations. Chapels were constructed, persecution had ended - strong reasons to come together and sing. The reed organ started making its way into many churches and living rooms. Choir practice remained one of the few acceptable forms of entertainment well into the 20th century. Teachers at Anabaptist schools were often choir directors or ministers. They encouraged and developed the musical abilities of their students. Classical church music was discovered. Choir festivals were held and large works were performed with great enthusiasm. Singing in four-part harmony became customary. The result : a considerable number of professional musicians in Switzerland have an Anabaptist background.

And today? Mennonites are still singing joyously. However, four-part harmony is no longer the norm. The number of choirs has declined over the years, and new worship forms are emerging. Diversity in praise has caused the repertoire of shared hymns to diminish. Many congregations are experiencing a kind of cultural conflict between members for whom traditional hymns and singing in harmony are closely linked to their Mennonite identity and others favouring a heavily anglicized form of worship music. Finding common ground is an ongoing challenge and a lesson in love.