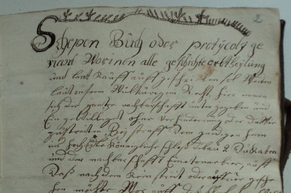 ‘One for all and all for one’

The motto of the Three Musketeers was well known to Mennonites living in Poland, who were famous for their support & solidarity within their communities.

The Mennonites in Poland were descendants of Dutch immigrants. Unlike most Polish peasants they were free people, not serfs. Their relationship with landlords and bishops was based on long term contracts, usually signed by a group of several farmers staying in one area. With the right to lease the land, they also received  privileges and obligations.

This led to the 16th century Vistula river delta housing rural Mennonite communities with large autonomy and well-developed self-government. The contracts often mentioned that all members of the community had to fulfill their obligations and be responsible ‘one for all and all for one’. This is a good description of the customs which regulated life in Mennonites villages in Poland.

The rules obeyed in the settlements were written down in so-called Willkürs: lists of articles in the form of decorated, long documents which were kept in special communal chests for generations. The most important parts included regulations for self-government. At its head was a 'Schultz' accompanied by councilors, all of them elected by local farmers. They held their office for one year and afterwards had to give a report to the community on the money they had spent and the activities they had undertaken.

All the neighbours paid a set fee to maintain the school, the teachers and the cemetery. Special attention was also paid to finding the best guardians for orphans. Those who neglected the most important obligations like paying tax, maintaining dikes, ditches, borders or fire prevention where severely punished by the community, with fines or even exile.

It was also customary to support victims of robbery. Even if only one horse or cow was stolen, each family had to send one person to chase the thief. Neighbours were obliged to give financial and material help to victims of fire as well. Self-governing organizations were also formed to protect dikes and ditches. They functioned until the 19th century and were another way the Mennonites were linked to the country of Poland.