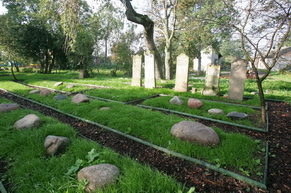 Although Mennonites have lived in many areas of Poland for about 400 years, there are only a few material relics of their presence which have survived until today. A part of this heritage are old and often forgotten cemeteries. The oldest Mennonite cemeteries in Poland were established by the first migrants who settled in the Vistula delta and valley in the 16th century. Maintained by all members of the local community, the cemeteries were usually found close to the settlements, on specially chosen natural or man-made hills, which protected them from dangerous flooding of the river.

Mennonite cemeteries were filled with important symbols, still found on relics of tombstones. Broken trees and butterflies symbolize the fragility and transience of human life, while poppies are used as symbols of eternal sleep. Skulls, situated usually at the bottom part of the gravestone, lead our thoughts to unavoidable death - the end of winding life, which is often symbolized by decorative borders. Other interesting decorations are gmerken – the coat of arms of families which were placed on the gravestones together with initials of the dead.

After the Second World War many of the Mennonite cemeteries, as well as those used by other protestants and Jews, faced a tragic fate when, as a  result of the  forced migration of Mennonites from Poland in 1945, they were left without any protection. Seen as traces of hostile German culture, old gravestones were often destroyed or removed by new inhabitants of the area. Many of the cemeteries disappeared. However, some of them, especially those situated far from settlements, remained, as more and more forgotten relics of the former communities that had lived there.

Today the situation is very different. In many places in Poland old Mennonite cemeteries are being carefully restored by various organizations and institutions, often with support from Mennonites living in the Netherlands, Germany and USA. There are lots of good examples of such activities, including the restoration of a cemetery in Stogi Malborskie (Heubuden) or a lapidarium called ‘11 villages cemetery’ which is a part of the Muzeum Żuławskie (Żuławy Museum) in Nowy Dwór Gdański. Nowadays these extraordinary sites are more than just places visited by descendants of members of former local Mennonite communities. They are also a space for educational activities and intercultural dialogue, as well as sites of eternal commemoration of the Mennonites - the previous inhabitants of the local area.