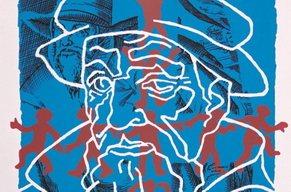 Menno entered priesthood in the early years of the Reformation, when the Sacramentists were also on the rise – they rejected the sacrifice of the Mass. As a curate in Pingjum, he doubted the Eucharist miracle,  and started to study the Bible more in-depth. Meanwhile the Anabaptist movement entered the Netherlands. After the beheading of Sicke Freerks, who had been re-baptized, Menno also started having doubts about infant baptism. Still, at the end of 1532 he became a priest in Witmarsum; in this period he was known as an 'evangelical preacher'.

The fast-growing Anabaptist movement put emphasis on the Second Coming of the Lord being at hand; the true believers had to live purely and non-violent in a congregation free of sin. An increasing group of Anabaptists, led by Jan Matthijs - later on succeeded by Jan van Leyden - tried to establish the 'New Jerusalem' in the cathedral city of Münster. They managed to overthrow the city council, and all inhabitants had to take up arms against the bishop, who would send an army to recapture the city.

After one year, this small Anabaptist kingdom perished in violence. Some people around Menno were involved in Anabaptist violence in Friesland. The Anabaptists where thrown into confusion, and persecution was severe. Menno still had a comfortable life, but felt like 'living in Egypt'. In 1536 he left the Catholic Church, and had to live in hiding. After much consideration and many dialogues, he was baptized.

In 1537 Menno accepted a request to become an elder. Gradually he became a leader of the Dutch Anabaptists, and the influence of his rival David Joris decreased. The authorities offered money for his capture. Several persons who had sheltered Menno were executed. He had started to write books and pamphlets, all considered illegal. He had to travel constantly, and finally lived as an exile in Holstein, with his wife Geertruyd and their children.

The pure congregation was crucial for the Anabaptists, therefore they used ban and shunning. This was meant to make sinners repent and return. In Emden the influential elder Lenaert Bouwens banned the husband of Swaan Rutgers. This mean she had to avoid all contact with him. She refused, because in doing so, she would break her marriage vows. Menno wanted to come to a settlement, but Lenaert threatened to ban him as well, and Menno yielded. This was the reason for the liberal group of the Waterlanders to branch off. On his deathbed, Menno expressed his regret about 'having been a servant of men, instead of God'.

Menno has been a church reformer of the second generation. He was no scholar like Luther, Zwingli or Calvin. As a practical leader, he managed to unite the peaceful Dutch Anabaptists during a stressful period. However, at the end of his life this unity fell apart.