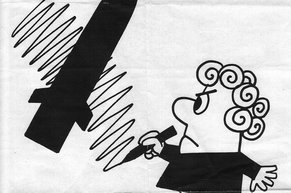 These days many Mennonites are involved in humanitarian aid work, and environmental and poverty issues. For a long time however, it was strongly believed that the church only called for  its members to form a community through catechismal teachings. Therefore Mennonites kept their distance from what happened in the (political) world. At the end of the eighteenth century, however, dissenters and patriotic Mennonites got involved with militant voluntary movements. They also became members of the First National Parliament. In the nineteenth century they got assimilated into society, but even in  the twentieth century it was not done to openly debate political ideologies. Even when the Nazis attacked and occupied the Netherlands, the Dutch Mennonites stayed silent. In the Mennonite weekly De Zondagsbode, we find barely any written pieces opposing Nazism. Only a minority of people addressed the worrying phenomenon of a variety of church members and ministers sympathising with Nazism and admiring Hilter for his socio-economic policy.

After the 1960s politics became more important. In Dutch society the Vietnam War and the threat of nuclear weapons were ardently debated. The central question for Mennonites was how to practice and promote peace and non-violence.

Mennonites and the  ‘polder model’

Dutch Mennonites live in a country where consensus plays a big part in the decision-making process. In order to make important decisions and share responsibilities, political movements and churches need counter-movements. The idea behind this 'poldermodel' is to find compromise-based solutions, not to polarise. Nowadays church members focus on what unites them versus what divides them when it comes to political issues. In church decision are made by consensus. Mennonites also have a strong tendency towards ecumenical thinking.

Currently there are several Christian political movements in the Netherlands. Mennonites, however, have never organised themselves into a specific Mennonite political party. Many of them prefer to vote for either a liberal party or a social-democratic program. A minority swings between these parties, and only a few are inspired by more radical, mostly left wing ideas. Themes like climate-change and sustainability of earth and society are also important to the Mennonite voter.

Nevertheless, Mennonites have been active in parliament and some of them were members of government. The most famous Mennonite politicians are C. Lely (1854-1929) whose name is forever linked to the Afsluitdijk, a major causeway which connects the provinces of North-Holland and Friesland. Another Mennonite politician was S. van Houten (1837 – 1930) who initiated a law against child labour. More recent politicians are D. Tommel (1942-) and mayor of Almere, Mrs. A. Jorritsma-Lebbink (1950-).