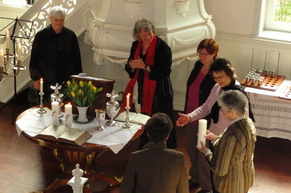 There are Mennonite congregations in various North German cities. Most of them are situated in or near Krefeld or Hamburg, but there are also congregations in Berlin, Neuwied, Bielefeld and various other places. Fourteen of these are united in the Union of German Mennonite Congregations established in 1886 (In German abbreviated to VDM), with around 2.100 members.

The VDM brings Mennonites in northern Germany together. Pastors meet to discuss theology and their local concerns. The needs and concerns of youth are addressed by youth workers, who organise camps and special events for children, teens and young adults. There is also an organisation that addresses women’s issues. The VDM als provides training for lay members who are engaged in the church.

Cooperation with other churches

Representatives of the VDM were present at the establishment of the World Council of Churches (WCC) in Amsterdam in 1948. Among German Mennonites there was a strong desire to seek greater unity between the various Christian churches after the horrors of WWII To this day Mennonites are convinced of the need for Christians to seek affiliation with each other, in order to resolve conflicts nonviolently and make the world a more peaceful place. The WCC now includes nearly 350 churches with about 550 Million members. Mennonites are linked to Christians in the entire world and similarly to a wide variety of churches in Germany. Member congregations of the VDM are also members in the Council of Christian Churches in Germany (ACK). In these dialogues Mennonites have become convinced that they can learn from other churches, and have experienced that Mennonites have an important contribution to make as well.

The VDM wishes to demonstrate that the message of Jesus Christ can be good news for everyone. Mennonites believe that our faith in Jesus Christ has a great deal to do with openness, tolerance, social commitment and peace. Faith motivates us to help others. For this reason the VDM established the Mennonite Peace Centre in Berlin, which works for peace in the neighbourhood and with the socially disadvantaged. There is room for everyone in our Mennonite congregations. We work to resolve conflicts in a peaceful manner. The VDM encourages its members to think deeply about their faith and at the same time to become active in their communities.