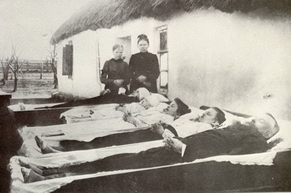 The long way of suffering begins

The most difficult time for Mennonites in Russia came after the October 1917 revolution when the Bolsheviks seized the power. With it, in Russia, a Civil war begun that ended in 1922/23. Several groups fought each other. Most feared by the  Mennonites were the Anarchist terror bands of Nestor Machno that regularly attacked Mennonite villages. For instance, in the Eichenfeld village in just one night in October 1919, 77 men and 4 women were murdered. Even more victims died from epidemic typhus which was also spread through the villages by Machnovites. Whole families died. In the Schönhorst village 132 of the 350 inhabitants died, in Chortitza 180 of the 767. More than 10% of the population died from the epidemic.

After all the years of bitter struggle the Mennonite economy was totally destroyed. Food tax collector troops of the new Soviet government seized agricultural products, taking away the last cereal from the peasants. A terrible famine broke out. After difficult negotiations with Bolsheviks, American and Dutch Mennonites were able to deliver food and clothing to their suffering brethren.

Mennonite delegates explored the possibilities of migration to America, and found much support. Canadian Mennonites requested immigration visas with the government, obtained credit for traveling, and promised that the newcomers would not become a burden to the state. Between 1923 and 1928, ca. 23.000 Mennonites found their way to Canada via Germany. In 1928, the Soviet government stopped this migration.

The impact of collectivization

The collectivization which should replace the private economy by a collective one began in Russia in 1929. Again, a terrible famine was the result, with 10 million victims in the Soviet Union in 1932-33 alone. Among the dispossessed and deported were many Mennonites. They were deprived of land, livestock, and machinery. Many were forcibly resettled and had to leave their villages and homes. Many of them died of starvation or illness in the deportation areas. Some deprived Mennonites went into cities looking for jobs and food. This is how the dissolution of the Mennonite colonies was brought about.

See more about Mennonites in Russia in the Mennonite Encyclopedia Online (http://www.gameo.org).