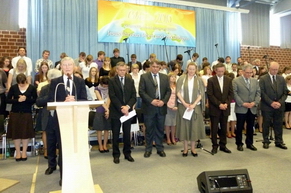 Diversity of Mennonites with Russian background

Of the approximately 2.5 Million Russian-born Germans who immigrated to Germany since the 1970s, about 200.000 have Mennonite roots. Many persons with a Mennonite background when entering Germany declared their confession as Mennonite, but many of them lived in regions of the Soviet Union where no Mennonite congregations existed after World War II. They were not baptized and never belonged to a Mennonite or Mennonite Brethren church (in the Soviet Union, these were the two dominant Mennonite branches). In the past decades, many of those ‘up-rooted’ people found their way back to the faith community. The more than 100 congregations of Russian-born Mennonites have 35.000 to 40.000 members.