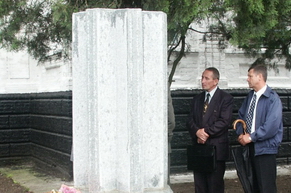 Mennonites in their new motherland Russia

A large part of the today’s Mennonite community in Germany consists of people  who spent a part of their life in Russia. Most of them immigrated to Germany in the last few decades. Their names look like Frisian and Flemish ones. In the stormy 16th century, they became Mennonites and fled to safer places in the Danzig area, then under Polish government. Later, when these territories became Prussian and they were again oppressed because of their faith, they looked for a new place to live in Russia.

In 1789 Russia warmly welcomed the first group of Mennonites. The Tsarist government promised them freedom of faith and exemption from military service and settled them in autonomous self-governed settlements called colonies. The first one was called Chortitza on the Dniepr river. At special Mennonite request, the government was even willing to provide them with twice as much land as other settlers from Germany. In 1804, the next major group of Mennonites from Prussia immigrated to Russia and founded the Molochna colony. Several smaller groups followed. The last migration wave took place in 1859.

The diligent and hard-working Mennonites turned the virgin soil of the steppes into a blossoming landscape. Their hard work made Southern Russia, where they settled, became ‘the breadbasket’ of Europe. The small factories they started, over a course of decades and generations, became a prosperous industry with a very strong position on the internal Russian market. With time, the original settlements became  too small for the growing Mennonite population. Having enough resources, the Mennonite community expanded eastwards. At the beginning of the 20th century, large colonies were established even in Siberia – the Asiatic part of Russia. Throughout the generations, they did not lose the ability to work hard, nor the readiness to settle in new, inhospitable areas to make them suitable for living .

On the eve of World War I and the Russian revolution of 1917, Mennonites in Russia became one of the most progressive members of the worldwide Mennonite family. Still living in colonies which had long before become German islands in the multi-ethnic Russian Empire, they managed to keep a vital connection to their motherland Germany.

See more about Mennonites in Russia in the Mennonite Encyclopedia Online (http://www.gameo.org)