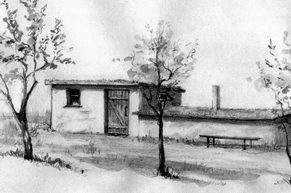 During the severe persecutions in the Stalin era, Mennonites lost almost all church elders, preachers and church buildings. After the Soviet Union entered World War II in June 1941, all Germans from the European part of the country were forcibly deported to Siberia and Central Asia, not allowed to leave these places. Mennonites were part of that tragedy. In addition, in the beginning of 1942, all remaining capable men were mobilized away from their jobs into the Worker’s Army.

In the Worker’s Army, under appalling conditions and often near to death, men began to cry to God together, occasionally coming together for hidden prayer meetings with no regard to confession. One of such secret prayer groups was organized in 1942 by Heinrich Voth, former elder of the Mennonite church in Nikolaifeld. And God heard them. So a revival of faith began. Hidden prayer groups came into being in many places. In 1945, many Mennonites that were taken to Germany during the war, were repatriated to the Soviet Union. They also gathered to worship in the places they found themselves. Where possible, Mennonites joined Russian Baptist congregations that were allowed during the war.

After the death of dictator Stalin in 1953, a political thaw set in, and in 1956 all Germans were released from their exile. The oppression of religion declined somewhat, and in many villages people that were converted in previous years, were baptized by courageous men. This led to the establishment of small village congregations in former places of exile. Being released from exile, Germans, and among them Mennonites, moved from their places of exile into the south of the country, especially to Kazakhstan and Kyrgyzstan, where they established new churches or joined existing Russian Baptist churches which showed much similarity to the Mennonite Brethren churches. This way a new church geography was established.

The thaw, at least in matters of religion, ended in 1958, and a new wave of persecution began. Mennonites were regarded as reactionary anti-governmental sectarians because of their historical non-resistance position. Their congregations were excluded from the list of officially permitted confessions, and had no chance of being legally recognized. This situation changed in 1966, giving the way for legalizing the first Mennonite and Mennonite Brethren congregations.

Many Mennonite Brethren and persons with a Mennonite background also joined Baptist churches.

Reference: And When They Shall Ask. A Docu-Drama of the Russian Mennonite Experience (1984/2010) dvd. www.mennonitemediasociety.com