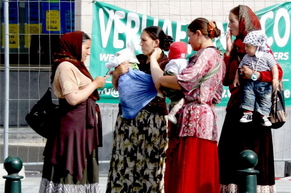 Shortly after World War II French Mennonites expressed their compassion by establishing social institutions. The majority with the help of North American Mennonites. Since then, there has been minimal development in this field, with the exception of the Welcome Centre Montbéliard, where those battling with social and economic difficulties have been finding help since 1996.

However, today the number of people in need has not diminished. Why this lack of initiatives? What are today’s challenges in launching projects to demonstrate our compassion toward everybody?

The reasons are numerous, but here are three. Firstly, it is much more difficult today to establish recognised social activities than it was 50 years ago.

Secondly, the absence of a theological drive resulting in visible acts. North American Mennonites played a key role in the past, but the theology of social action apparently has not been fully integrated in our French Mennonite communities.

Thirdly, one may wonder whether, since the1950s, French Mennonites have become somewhat gentrified; better integrated into society, mostly better educated, they now have difficulty identifying themselves with the excluded. This phenomenon is amplified by the context of continual media coverage: ‘The media allow us to see, and simply ignore’ (Jean-Marc Chappuis).

In the French context, what are the areas in which compassion could be exercised in new ways? Let us consider three societal groups in particularly difficulty.

First: foreigners and immigrants. The rise of ideas of the extreme right and their more prominent place should make Christians reconsider their position as they should be revealing a message of love towards both neighbours and enemies. Unfortunately these xenophobic ideas find a fertile soil here in Alsace. Campaigning in favour of foreigners and immigrants would be a prophetic action.

Second: gypsies, a stigmatized foreign population. Although some gypsies are responsible for undesirable behaviour, aggressiveness towards them and the forcible evacuation of settlements revives memories of dark days in Europe. If Jesus spoke in parables today, perhaps a gypsy would be the model of compassion that he would invite his listeners to consider.

Third: social breakdown, divorces have rocketed, individualism is dominant and the population is more elderly. In this context, the number of people living alone has risen sharply in recent decades. Single mothers struggling with jobs, children and exhaustion deserve answers in terms of practical and moral support.

Should we conclude that French Mennonite compassion no longer exists?