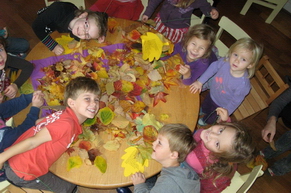 Mennonites practice baptism based on a self-written confession of Faith. To accomplish this, their religious education takes a longer period of time and is offered to young children as well as young people preparing themselves for baptism.

Currently  many congregations offer the preschool children their own Sunday morning service. This is a Sunday School lesson with a theme and little rituals based on picture books containing different themes. Corien van Ark developed a method called ‘Join the circle’ (Kom in de kring) for these lessons. For adults preparing themselves for baptism, catechism meetings are held, often using a method edited by Gerke van Hiele called ‘Touched by the Eternal One’ (Aangeraakt door de Eeuwige). The purpose of this method is not to pass down a written doctrine. Instead, at each meeting a series of Bible passages, songs, discussion items, creative activities and a summary of questions are presented for the members to work with as a group.  Apart from this, there is a short course for those eighteen and older to prepare themselves to be lay preachers in church services.

Both methods of Corien van Ark and Gerke van Hiele are aimed at forming a personally experienced faith. In the postwar years material was collected by those concerned with education in faith, especially women. For the Sunday School they contributed children’s books with stories with a key point, and stories for reflection , along with a manual for parents.

From passing on knowledge to forming faith

Only since the end of the seventeenth century did parents request the congregation to take care of education in faith. Before this, it was seen as the job of the parents. The teaching material contained  a doctrine to be learned by heart and it also put and emphasis on virtues and on knowledge of the Bible. In the eighteenth century a moderate Enlightenment slowly gained more influence on the education in faith. Mennonites had a prominent position in this development because in their study material they had already included the connection between the natural sciences and knowing God. In the next century, modernism, which developed under the influence of academic Bible criticism, pointed the catechism in a more liberal direction. This liberalism which promotes a personally experienced faith and an individual interpretation of faith, sets the tone of education in faith to this day.